Inventing the Third Nation: A Brief History of Marathi Poetry of Past Hundred Years

Yesterday, I read my paper titled' Re-imagining the Nation in the Post Global Period:The Case of Post-Nineties Marathi Poetry' at the National Workshop on Literary Historiography organized by the UGC-DRS-I SAP Program and the Department of English, Faculty of Arts, The MS University of Baroda.
I began my talk by commenting on how academia and intellectuals of this country are obsessed with the desire for mourning for 'dying languages' and cultures and are blind to new languages and cultures being BORN everywhere around them. My talk was about these 'birth' of new languages and cultures. The English which I was using in the seminar hall, I said, was a newly born language and not the older one by the same name which was born on the British isles one thousand years ago. The birth of new languages, like the language of Manya Joshi or Sanjeev Khandekar, is the focus of my talk, I said.

Using Benedict Anderson's theorization of nation as an imagined political community, I looked at how the nationhood was constructed in the Marathi poetry of the twentieth and the twenty first century.
I talked about how the invention of modern nation was possible in India in the nineteenth century due to colonial modernity , especially the rise of print-capitalism and colonial education system. This nation, as we know, was an orientalist construct which was elitist, upper caste,Brahminical, and masculine. It was based on the view of culture which was High Textual. This paradigm was radically questioned from within by Jyotiba Phule (1827-1890) and Mahatma Gandhi (1869-1948) in their distinctive ways. The impact of the print capitalism and the western education on Marathi language gave birth to new kind of Marathi which did not exist earlier. The birth of a new nation was actually a birth of a new language.
Marathi poetry of this period, as characterized by the poetry of Keshavsuta (1866-1905)and Balakavi (1890-1918)is reformist, idealist, and influenced by the Anglo American romanticism. The exception to this paradigm was the poetry of Bahinabai Chaoudhary (1807-1882), an illiterate genius whose brilliant works were unavailable to the 'community' as they were orally composed, and hence outside of the print-capitalism of literary culture of the time.
The second discontinuity in imagining nation was after independence. This 'post-colonial nation' was a critique of the colonial nation. The attempts were made to democratize and open up the colonial nation. This was a 'demotic' re-imagining of the colonial nation which attempted to democratize both modernity and literary culture. The efforts to democratize modernity and literary culture resulted in the rise of 'little magazine movements'. These vision of culture and modernity which these magazines embodied was democratic, pluralist and anti-establishment. 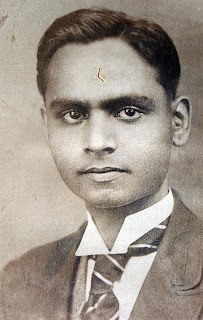 The avant-garde poetry of B.S. Mardhekar (1909-1956)is situated at the cusp of these two imaginings of nations and heralds a paradigm shift in Marathi poetry. His poems express despair resulting from World War II, growing industrialization, urbanization and erosion of traditional values. They mark a departure from the earlier practice of poetry and opens up possibilities for expression which did not exist earlier. Mardhekar’s attempt to integrate the non-conformist aspects of Bhakti poetics and native traditions with international modernist aesthetics is a significant characteristic of the post-colonial cultural tendencies. From 1955 to 1975, poetry which expressed this dissenting vision of life, culture and nationhood pervaded the little magazines. (Right: Pic of Maradhekar) 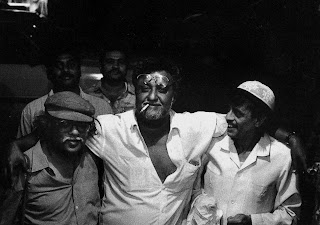 The ‘little magazines’ like ‘Shabda’, ‘Vacha’, and ‘Asmitadarsha’ had a distinct anti-Establishment outlook. Complex, experimental and challenging poetry of Arun Kolatkar (1932-2004), Dilip Chitre (1938-2009), Vasant Dahake (1942- ) and Namdeo Dhasal (1949- ) emerged from the movement. Their works bear a distinct influence of the international modernist and postmodernist poetry. The Dalit poetry or ‘the poetry of the oppressed’, influenced by the radically reformist philosophy of Dr. Babasaheb Ambedkar (1891-1956) and Jyotiba Phule (1827-1890), exploded on the scene in the same period. The poets like Dhasal straddled both avant-garde and the Dalit poetics. Feminism also started making its presence felt in this period. Malika Amar Sheikh (1957- ) writes vigorous poetry which combines feminism with other dissenting political ideologies. In the eighties, the tribal poets like Bhujang Meshram (1958-2007) started writing poetry which combined their quest for tribal identity with protest against the exploitative social system and the poets like Arun Kale (1952-2008) continued the tradition of Dalit poetry.
This alternative way of imagining a nation was also an alternative way of using language and so the language of post-colonial Marathi poetry was more inclusive, demotic and radical. This birth of new languages and new languages of literature is correlated to the birth of the new idea of nation.
The third shift in the way we imagine ourselves, I argued, takes place in the nineties, largely due to economic reforms, globalization and revolution in media. While the colonial nation was constructed by introduction of print-capitalism, national imagination today is shaped by satellite television ( news, soaps and reality shows), the Internet, cell phone revolution and the overwhelming power of market. The context of post-cold war geopolitics is a significant context to this construction of nation.
This new construction of nation can be theoretically analyzed in multiple ways. For instance, one can fruitfully combine Anderson’s theorization of nation as an imagined community with Howard Rheingold’s theorization of ‘virtual communities’ ( 1991/2000).A virtual community is a social network of individuals who interact through specific media, potentially crossing geographical and political boundaries in order to pursue mutual interests or goals. One of the most pervasive types of virtual community includes social networking services, which consist of various online communities. Following Toffler, one can also think of this new imagining of nation as the ‘Third Wave’ nation.
Following Raymond Williams (1977), I think we can in the year 2011 also think of the first construction of the nation as ‘archaic’, the post-colonial nation as ‘residual’ and the third post-nineties ‘nation’ as `emergent’. The critique of this 'global nation' ( an oxymoron)is only possible on globalized platforms. This contradiction- that globalization can be critiqued only on globalized platform-is the crucial aspect of globalization.
Marathi poetry of this period reflects this emergent nation in multiple ways. Poetic idiom was transformed in the nineties due to the social and cultural crises caused by these processes of globalization, technological revolution, and economic reforms. New little magazines like ‘Shabadvedh’ (1989-2009), ‘Abhidhanantar’ (1992-2009) played an important role by providing a platform for new voices to emerge.
Saleel Wagh’s satirical poetry mocking at the globalized urban culture and corporate world, Manya Joshi’s effort to convert the chaos of contemporary metropolitan culture into cacophonic music, Hemant Divate’s asphyxiation of living in a sham urban upper middle class, Sanjeev Khandekar’s prosaic caricature of disfigured human self in the world transformed by scientific-technological forces and the forces of global capitalism can be considered as a few representative poets of this period. The Dalit poetry of Arun Kale and Mahendra Bhavre rethink the Dalit politics and poetics in the context of the globalized world. The works of these poets also appear mostly in the new little magazines of this period. 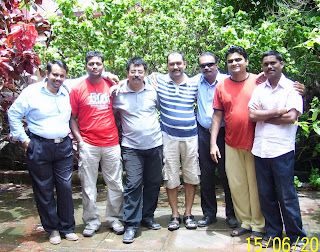 These poets I argued are inventing the language of Marathi poetry because the new Marathis are being born outside the academic world which is simply engaged in mourning the death of Marathi.
The discussions that followed my presentations were equally interesting. Deeptha asked me if the events like Babri Mosque demolition can be understood within this new idea of nation. I replied that the communalism of the late eighties and the nineties was not the same as the communalism of partition era. Even the  Naxal movement of the nineties and first decade of the twenty first century are not same. The altered context is what I was emphasizing. The altered context, I could not respond due to the lack of time, was the rise of 'new capitalism' of the nineties. There were questions about 'heterogeneous times', about multiple time frames inside globalization. I responded by drawing the attention to Raymond Williams' terms I mentioned in the talk. He talks about how the archaic, the residual and the emergent exist simultaneously in a single moment.
WORKS I CITED IN MY TALK:
Anderson, Benedict R. O'G. (1991). Imagined communities: reflections on the origin and spread of nationalism (Revised and extended. ed.). : Verso. pp. 224.
Rheingold, H. (2000). The Virtual Community: Homesteading on the Electronic Frontier. : MIT Press.
Toffler, Alvin. The Third Wave. Bantam Books, 1981
Williams, Raymond. Marxism and Literature. : Press, 1977, pp 121-6