Something extraordinary happened when I was on my way back from Mumbai on 22 November after participating in the 'Advance Communication Course: Power to Create' course. From the windows I was startled to discover that with my uttering of the word 'the mountains' , the mountains appeared in all their glory. The utterance and the appearance of mountains in my phenomenological space was a simultaneous event. The things appear to us the moment we utter their names. The words create the worlds. But, you would say, the things exit 'out there' whether we use language or not and,  the things do not appear in front of us 'in reality' if we mention them. The world 'out there', however, cannot exist independently of our language and the distinction between 'the imagination' and 'reality' is not so distinct in our phenomenological space. In fact, phenomenology 'brackets' the questions like these and treats the objects in our consciousness at par, irrespective whether they are 'real' ( in the sense of having 'objective' existence) or 'imaginary'. The space of our life, in the phenomenological terminology, is the space of our 'intentionality'. Words create worlds in our life. Our thoughts and our cognition is shaped by our words.
I am a poet, as if I didn't know this. I knew all this very exactly, but I thought it was limited to my art and my life had nothing to do with this startlingly obvious fact. In fact, as an artist, I was operating from 'the new model' of communication as distinguished by the Landmark Communication Curriculum: I was not 'expressing' anything in particular as a poet- I was creating an alternative world. And this is exactly what was setting me apart from my contemporary Marathi poets- they were 'expressing' something-ideas, feelings etc, I was creating. What the Communication Curriculum revealed to me was, that 'the reality' of the life I was living, the world I was inhabiting, was also made of words, and not just that, they are 'created' by me. 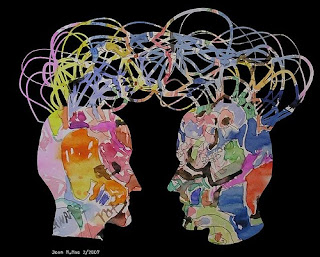 I have already written about the Communication for Access to Power course in my earlier blog entry. The Advance Communication Course focussed on getting rid of our habitual modes of communication. It began by distinguishing those 'triggers' and 'cues' which throw us back into the 'default/inherited/old model' of communication which is based on the assumption that the world is 'out there' or 'in here', and the function of communication was to bridge the gap between 'us' and the 'world' which may be within us or 'out there'. When we are living in the old model, we are 'stimulus-response' machines and the basic purpose of communicating in our life was to either 'survive' (someone, something, some situations or ourselves) or to 'fix' someone or something ( including ourselves). The old model of communication is based on past which we project into our future. The triggers could be  phrases like' You are inefficient' or ' You are boring' or ' You too are like others' and so on. We were given hands-on exercises to respond to these words from 'nothing' instead of responding from past-based, habitual responses. We were shown that now we have a choice when it comes to responding, instead of responding in a mechanical way.
A fascinating distinction was the 'Automatic Recurring Dialogues (ARDs)' in our lives existing at all levels of communication. In fact, we live our lives within these ARDs. These are conversations are variations on fixed basic themes and are used not just by people in our lives to us, but also among themselves. In my life, I find the dialogues like ' You are lazy or not paying attention'and so on recurring not just between me and others but also among others to others. We were taught to uncover the past episodes which underlay ARDS and dismantle them. We were also trained to deal with the communications that we 'withhold' from others.
One of the most important part of the course dealt with the ways in which we 'resist' communication from others and communicating with others. I discovered that though after the Forum I given up huge anger against my mother, I still did not communicate with her and the reason I gave myself was that what she wants to talk about is rather trivial and unimportant compared to the things I was doing. These 'trivial' things like what maid servant does or what the neighbours are saying are important in her life. The idea is to enter the other person's world to 'get' what that person is saying. This is called 'recreating' in the Communication Course terminology. To 'recreate' someone is 'to get' ( not 'to understand') what others are saying in its entirety. We were given exercises for 'recreating' what others had said- word to word- " nothing added, nothing taken away, nothing changed". Yours faithfully, obviously performed below average to average in these exercises. We were also asked to recreate other's concerns, commitments and contexts and not just the words. Very powerful exercises indeed. People listen only through their opinions and on going thought processes. We were taught to 'distinguish' these things and put them aside and communicate from ' nothing'. Only then one can fully 'recreate' what others are saying . The Forum gave us the distinction of ' Already Always Listening' (AAL) where in we discovered that we listen to others through through our internal dialogue which is made up of our opinions, beliefs and assumptions. Already existing beliefs, opinions and assumptions limit our perception of possibilities. If I believe that someone is an idiot, boring or naive, my listening of that person will be through this and even if that person is saying something interesting and intelligent, I will filter that out. There is no possibility in 'Already Always Listening'.The AAL is always past based and as long as you are inside of that  you are not really present for new possibilities.  This AAL, as the Forum teaches, is part of our design as humans, a part of our machinery and hence, not really who we are. The Advanced Communication Course gave us yet another fascinating distinction- The Morass.

The Advanced Course actually started only in the last one and half hours of the two and half days course! This was because the earlier part of it was about completing the past based habits of communication. The last session on Sunday was probably most profound and spiritual experience of my life. One can create something only from nothing-one can create, say 'X' only from 'not-X'. But we discovered that 'not-X' is 'a lie', because 'not-X' consists of 'X' hidden and concealed inside of 'not-X'. Hence the distinction between the Self and the Other has to be rethought. The Other is actually 'not-Self' which means it is the Self hidden and concealed in the 'not-Self'. We were to told to look at the Other, our partner, and be present to him so that we realize him as our 'non-self'. But 'not-self' is a lie! Now we know who the Other is! In first Communication Course: Access to Power course, we were given the distinction about who we are. I discovered who ' I' was. I was not the meaning making machinery, not experiences,not thoughts, not sensations but I was 'space' -nothing- in which my life, my thoughts, feelings, emotions, ideas, experiences emerged. This 'space of nothing' was like a blackboard in which white chalk marks come into being. I am not my life, I am a 'clearing' for my life. Communication is about giving this 'space of nothing' for other's communication, about being clearing for other's communication. Only then can you 'recreate' others or achieve miracles like 'achieving multiple outcomes from a single communication'. In Advanced Course I also discovered who the Other was- the Other was 'me' - the space of nothing- a clearing for life- hidden inside 'not-me'. 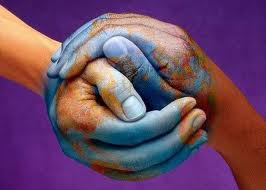 However, apart from the distinctions of the Advanced Communication course, I did something else. Raghu Sawney, our trainer, advised the participants to stand naked in front of mirror and fall in love with ourselves. Love every part of our body, look into our eyes and say- I love you and accept the way you are and way you are not. We also have to tell ourselves that we respect this person completely and everyone else should do the same. When I did so, I ended the bitter quarrels- 'the rackets'- I had with myself and was complete. I could sense a great surge of confidence and assertiveness. I felt powerful. Strangers noticed and told me that I looked 'complete'. I discovered the power of loving myself and respecting myself for the first time in my life. Today,I write poetry not 'because of' or ' in order to' survive or fix or even 'look good'. I write poetry because I choose to write it.

My classroom teaching has changed. How I interact with people has changed. Ashwini received comments from relatives when I attended my nephew's wedding regarding how I have changed and how I talk nicely and properly with people! Communication Course brings back 'love and affinity' in our lives, for presence of ' love and affinity' is an indication of 'being-in-communication'. I remember the wonderful distinction of ' dancing-in-communication' which happens when you are not trying to control communication and simply 'correlate' ourselves to others. I experienced it a couple of time too and it was fun. Communication which is not 'in order to' survive or fix something gives you a sense of freedom and love in communication. Nowadays I discover when I am 'resisting' communication and when I am operating from the older communication model of stimulus-response based on surviving and fixing. I have experienced great freedom, joy, confidence and have noticed a distinctive shift in people's 'listening' of me. Now that's awesome! Highly recommended! If you are wondering whether you should do it or not, I suggest -go get it! 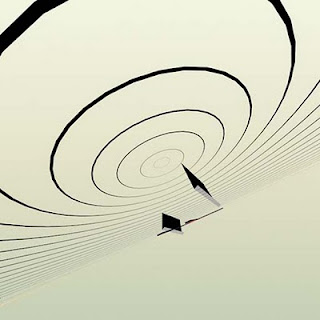 Texture of Forgetfulness: A New Poem by Me