He is out and is at large. He shouldn't be.He should be long dead, and far off in the world of myths. He belongs to pre-capitalist, even pre feudal hoary antiquity. But then now he is in our midst. He is all over the place. Divided and unredeemable, but alive,contrary to what the Mahabharata says. He is evil. He is a serial killer who aught to be imprisoned. Who released him? Well, Devy released him on 6 th May in the VY Kantak Seminar Room of the Dept.of English, Faculty of Arts, MS University of Baroda. But actually he had released him almost seventeen years ago. In the years 1993-95, to be more precise. I was  writing  in English and even in Hindi. It was mostly juvenellia but it had started becoming more and more modernist. I learned of Devy's Aurobindo scholarship and showed him my Hindi renderings of Savitri and he was impressed ( I guess). I showed him my English poems and he suggested I should try my hand at writing in Marathi and the guy did not know what he was doing. Its like the jailer who finds the face of a serial killer rather innocent,takes pity on him and releases him out of compassion. The killer goes out and the first thing he does is slits throats of five people in the city.  I started writing poetry and entered bad books of almost any senior critics and poets in Maharashtra. People were simply irked and annoyed with me. Who the hell is this guy ?What the hell is he talking about? Where the hell has he come from?and more  importantly why the hell is he here? 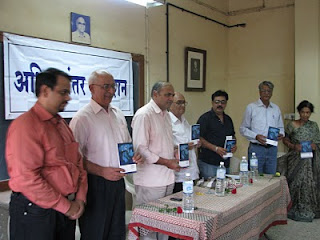 I am an upstart writer in Maharashtra. A bug, actually. I cant possibly do much harm to the Establishment ( which is ruined and in shambles due to other reasons) but I can be a bloody pain in neck : consider my vicious and sharp articles in the globalization wars in contemporary Marathi poetry or my tampering with political set up of Marathi poetry by bringing out something like Live Update. Or consider my critical takes on the pet Ideology of the Establishment : Nativism+ Socialism+Realism. The ideology of Devy which is fashionable in English studies is the ideology of Establishment in Marathi: the Sarkari View of Literature which I have attacked in no uncertain terms in my writings.

It is not surprising that the speakers on the occasion: Dr Devy, Prof Kannal or Dr Karogal hardly discussed the book. They were either talking to Sachin Ketkar the critic or like Dr Devy trying to contextualize him. 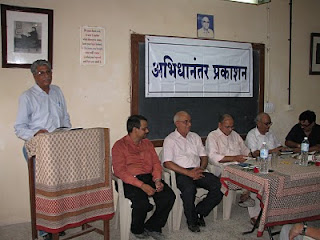 Prof Kannal talked about the insistence on contemporaneity or the towards the present moment that I have in my critical writing and tried to point out how some  of my poems were not at all contemporary - he did not talk about those which were, obviously, unsurprisingly. I responded by talking about Borges' Pierre Menard who tried to rewrite Don Quixote exactly as Cervantes wrote it two  hundred years ago. He ends up copying passages from Quixote word to word in the same language, but the narrator in Borges says that in spite of perfect copying the texts were different. Contemporariness is not an option, it is only when you are not fully aware of the present that you feel there is something like timelessness. The intimations of eternity are temporary. What I should have emphasized, and this I realized later, was the fact that we treat literature as if it does not have any temporal dimension and a historical context. This is the approach so deeply embedded  in our thinking about literature that we treat Tukaram or Shakespeare as if they our contemporaries. This treatment actually does not do justice to the texts we read. Tukaram's obsession with Vitthal has to be contextualized to be understood. It is this ahistorical way of reading that creates the illusion of the eternal in literature. 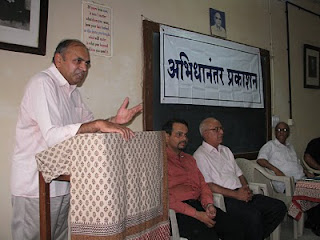 Devy,on the other hand,put me in two traditions, when I thought I had none. He said that the Dept of English in the MS University had two major Indian writers in English as faculties who were also bilinguals and translators: Sri Aurobindo  and AK Ramanujan. He also placed me in the long line of Marathi bilingual writers like Arun Kolatkar,Dilip Chitre, Vilas Sarang and Kiran Nagarkar. Devy said this probably with tongue firmly in his cheek.

However,the best thing he said about me was that when I was his student, he suspected me of turning out to be a poet looking at my `erratic laziness''. But he felt looking the girls chasing me ( what girls, which girls,where girls) I might turn out to be a romantic poet who might churn out mushy sugary stuff. 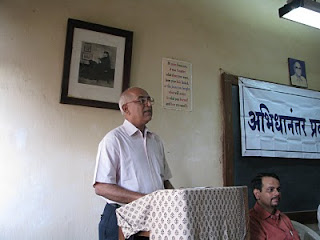 Prof Salat had interesting things to say about my poems. He commented on the all sorts of ordinary and extraordinary `objects' found all over and around my poetry,and how I make a poetic use of them.

Mangesh spoke with reference to Prof Kannal's views and pointed out that a bunch of my poems in the earlier part of my collection are unprecedented in style, theme and treatment in Marathi and are unique while some of my poems can be considered as extensions of my earlier phase. He read out my Dildopnishad and others to make his point. The programme was fun anyway and had a great time with friends. Ashwini was the master of ceremonies.

The best response came from Amogh. He simply fell asleep in his chair with head on the desk!
Posted by Sachin C. Ketkar at 10:10 PM

Many well wisher like us missed the invite to the function so read this report blog instead..congrats..

Many well wisher like us missed the invite to the function so read this report blog instead..congrats..

Dear Sir,
Read the report and must say something in a nutshell. I just feel proud to be associated with a phenomenon called Dr. Sachin Ketkar.
(P.S.: I also feel symapthetic for Amogh!!! LOLz...)

Loved your report and even more, enjoyed your profile.Multimodal imagination comes into its own in cyberspace. And you go beyond with your striding across the variety of media.
Keep it up.