Portrait of An Artist as a Young Drag Queen: Art as Transgendering in Natrang 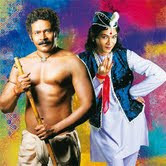 Its Judith Butler meets Anand Yadav. Recently released Marathi film `Natrang’, which is based on a novel by the noted Marathi novelist Anand Yadav, is a moving account of Guna a young moustache twirling peasant who dreams of making it big in tamasha- a traditional folk multimedia comprising of erotic songs and dances. He is an aspiring artist who dreams of playing a King in tamasha and ends up as a Queen. Economic and circumstances force him to play the role of Nachya, a dancing drag queen in tamasha and thus face the social stigmatization, humiliation and sexual abuse.   The Nachya, though is socially humiliated, is crucial for commercial success of tamasha for providing double entendres and homoerotic titillation.
The film depicts the complex power play between gender, art and commerce. The film shows how patriarchy can be as cruel to men as it is to women because it traps people in their genders. His wife and children are harassed and insulted as family of phalkya or drag queen by the villagers. His mistress who loves him refuses to marry Nachya. Precisely at the moment Guna tries to negotiate his double self by narrating the mythical stories of Brihanalla (Arjun in drags) and Mohini (Vishnu as seductress) , he is raped by the Bad Guys. The icon of Nataraj- Shiva as a cosmic dancer (who, incidentally, is also Ardhanarinateshwar- The Lord as Half Woman) is evoked in many places. The film also celebrates the archetypal power of art to transgress all social demarcations and borders including those of gender.

The story goes on to show how he persists in his art even after his family and friends leave him and he ends up a successful artist. The focus of the story is on how an artist has to sacrifice and overcome almost everything. Guna sacrifices masculinity one the most prized possession in a patriarchal set up and this is his highest sacrifice. Though women have been doing it for ages, not often is man shown doing the same and that’s where the success of the film lies. Not often do you see something this serious in Marathi cinema which is almost entering its golden period with Kairee (2001), Dhyaas Parva (2001) Shwaas (2004), Devarai (2005) and recently and Natarang (2010) and self-reflexive Harishchandrachi Factory( 2009) based on Dadasaheb Phalke and his first film Raja Harishchandra to name a few ( there are more very good films too). Shwaas and Harishchandrachi Factory were ’s entries for the Academy Awards. Thankfully it is emerging out of its obsession with mindless `comedy’ and clichéd tearjerker. 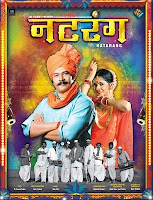 Atul Kulkarni is already famous as an extremely accomplished actor and he is simply awesome. He depicts his shift from macho to `wimp’ and agonizing ambivalence of being trapped into two genders: one which he can’t leave behind and the other he cant afford to leave with sensitivity. He actually built his physique for the role of macho Guna and lost dozens of kilograms to portray the nachya. The film has excellent performances by Kishore Kadam and Vibhavari Deshpande. Vibhavari’s role as Guna’s wife is particularly well performed. She is indeed an actress to watch out for.

In spite of repeated warnings of not judging the book by its film, the film has aroused my curiosity regarding the novel. I find out if the focus on gender politics is explicit in the novel or it is in Ravi Jadhav’s interpretation. I am not a great admirer of Anand Yadav, but yes I want to have a go at his book.
Posted by Sachin C. Ketkar at 11:41 PM

Very interesting. I think Marathi films are very original in their content and narration and depict a lot of Indian-ness.

a very good analytical overview..thanks a lot for the encouragement