Of Leadership and Politics: A Gandhi Jayanti Reflection 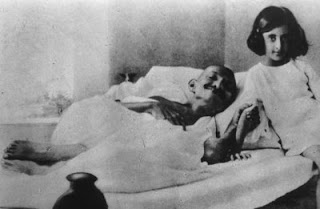 It requires a certain amount of maturity to understand Gandhi. Very often people who hate him and people who convert him into a `saint', fail to understand Gandhi. Both of them start from the wrong end- his `ideology'. Even I did the same and was cynical of him. It is so very easy to be cynical of Gandhi. It is so very difficult to understand him, but then it is so very easy to appreciate his greatness. He had only action, commitment and practice. His ideology is merely an attempt to explain what he was trying to do and hence of little consequence to him. His action was his ideology. What he was doing is crucial to us, and once we understand what he was trying to do, we realize why is one of the greatest leaders of all time.
He was trying to see how far is it possible to commit oneself completely and thoroughly to welfare of the society. He tried to become the person he was committed too by wearing clothes like him and living life like him. It is this commitment and complete sense of responsibility to his society which makes him the greatest leader ever. Understanding Gandhi will make us aware of the difference between a politician, a saint and a leader.
The politician is the person who wants power and sees responsibility as a burden. He takes up responsibility for gaining power. The leader is a person who takes up responsibility. The leader is a person who commits himself to the other. Power becomes a means for fulfilling the responsibility for the leader. A leader, because he commits does not require power because this commitment makes him powerful. A Gandhi does not require a post to be powerful. Unlike a saint who insist that you follow him, a leader dedicates himself to you. Thats why Gandhi was much more than a saint or politician.
We need Gandhi today is not because of his abstract ideas of truth, non-violence or like . We want Gandhi because we want to learn how to commit ourselves to the society we live in. To dedicate ourselves completely to others. The society we live in in the twenty first century teaches us how to be completely self-centred and non-committal, which results in extreme powerlessness of the individual.
Gandhi teaches us that we can become powerful only if we dedicate ourselves to others. We want power without responsibility, consequently we can only be weak. If we take up responsibility, we are already powerful we need not `desire power'. You don't become powerful by desiring power. It is precisely when we give it up the lust for power that we become powerful- this is the Zen of Power, this is the Koan which Gandhi personifies.
Posted by Sachin C. Ketkar at 1:48 PM

what your have written is straight from the heart. I will forward this link to as many as possible
do keep writing on Gandhi and his relevance
regards
Subhash Chheda

You written touch heart of anyone.
Salute to you from bottom of my heart.

Keep writing on Ghandhiji & his ideaL

You make a valid point regarding the need for us to commit ourselves to the society we live in. I think Gandhi has a lot to teach about a lot of things that do not include Sainthood, but do include both principles and pragmatism.

I also wrote about something related today; would love to have you stop by: www.greenlightdhaba.org
HB

A thought-provoking piece! Thanks for sharing.
Asma.

Thanks friends on your comments!

hello sachin
really liked ur piece. i had written a longer piece on understanding gandhi in 2005. here is the link.
http://www.chowk.com/articles/9758
hiren